For many centuries, when Japan was structured along feudal lines, the lowest category of all were known as eta or hinin – derogatory terms for outcaste groups typically associated with stigmatized work, such as butchers and leather workers. Living in isolated communities on the margins of society, they were eventually classified together as Burakumin (literally ‘hamlet people’) and suffered a range of dehumanizing policies in their everyday lives.

With the abolition of the feudal system in 1871, Buraku were granted legal equality for the first time. In practice, however, they were still widely ostracized. Over time, as Japan urbanized, many of these formerly rural settlements became neighbourhoods in towns and cities across the country, particularly Osaka and Kyoto, still segregated from surrounding areas and with little in the way of public services such as clean water or sanitation. Despite efforts to mobilize a countrywide Buraku movement with the foundation of the National Levellers’ Association in 1922, later renamed the Buraku Liberation League after World War Two, their exclusion persisted – a situation that nevertheless paved the way for a period of extraordinary activism by the Buraku community.

A period of activism

Kenzo Tomonaga has been at the forefront of the Buraku struggle since the 1960s. Though not Buraku himself, he married a resident of Sumiyoshi, a Buraku neighbourhood in Osaka, and went on to join the Buraku Liberation Research Institute in 1968, where he served as director for many years. He has witnessed first-hand the transformation of the Buraku rights movement over the last 50 years and is as aware as anyone of the hard work behind the progress that has been achieved.

At around the time that Tomonaga started to work with the Buraku movement, the Japanese government launched the Law on Special Measures for Dowa Projects. Though it made no specific mention of Buraku, favouring instead the term ‘Dowa’ (signifying ‘assimilation’), the underdeveloped and impoverished neighbourhoods typically targeted with housing and other assistance by the programme were exclusively made up of Buraku communities. This funding played a vital role in reversing the legacy of decades of public neglect in some of the most marginalized areas across Japan, bringing essential services and infrastructure for the very first time. 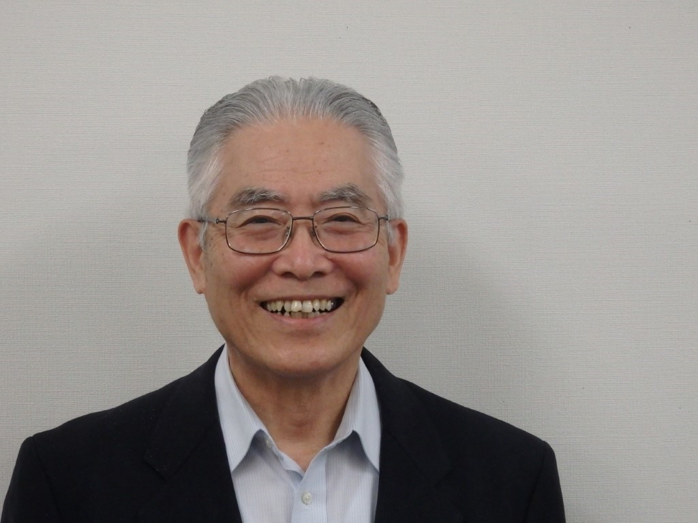 A portrait of Kenzo Tomonaga.

The movement also took on an increasingly international dimension from the 1970s, with activists engaging United Nations (UN) bodies and mechanisms in an effort to pressure the Japanese government to adopt various human rights instruments. Tomonaga played a major role in these activities. One important milestone for the movement was the Second World Conference against Racism organized by the United Nations (UN) in Geneva in 1983. The BLL did not yet have UN consultative status but with the help of Ben Whitaker, MRG’s Executive Director at the time, they were able to give a presentation to the assembly – the first time the issue of Buraku discrimination was formally discussed at the level of the UN, and with Japanese government representatives in attendance.

Throughout this period, the Japanese government continued to operate the Dowa programme, bringing significant improvements to Buraku communities across the country. This process was instrumental in addressing many of the shortfalls in public services, housing and other visible manifestations of their exclusion. At the same time, their problems were framed largely in terms of poverty and economic development, rather than human rights and discrimination – yet many Buraku still contended with hate speech and stigmatization in their everyday lives.

If further proof was needed, reports emerged in the mid-1970s of a secret registry of Buraku neighbourhoods that corporations were using as a means of covertly blacklisting Buraku applicants from employment. While Japan’s Family Registration Act was subsequently revised to prevent third parties from accessing government-held family registries, in private the use of unofficial lists by agencies persisted, though the practice was gradually curbed in the 1980s with the passage of local ordinances in Osaka and elsewhere: these prohibited anyone from checking another individual’s background to determine their ancestry.

This demonstrates the limitations of the Japanese government’s tendency to address discrimination through money and resources without a broader engagement with the human rights issues at stake. The Dowa programme made great strides in narrowing the gap between Buraku communities and other Japanese, but it did not spell an end to hate speech and prejudice. Indeed, towards the end of the Dowa programme Tomonaga reports that it became a sticking point for right-wing groups and others hostile to Buraku, with isolated cases of corruption and mismanagement within the community being exploited to perpetuate negative stereotypes about them. Consequently, the programme had begun to be counterproductive. 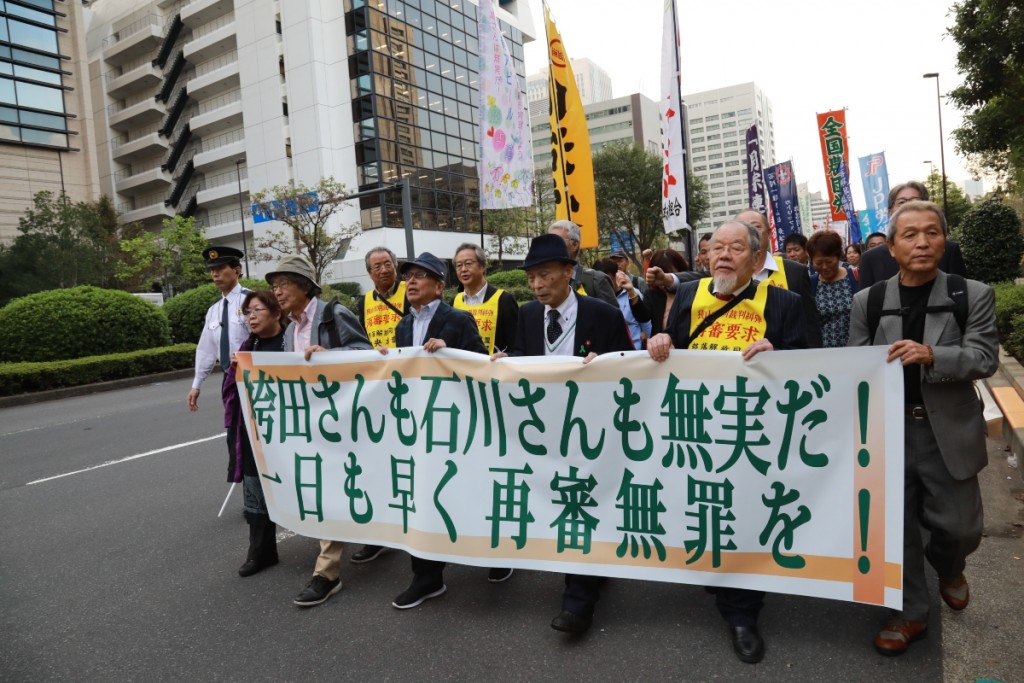 March in Tokyo calling for the retrial of both the Sayama case and the Hakamada case – claiming each of them is innocent.

There was relatively little action from the government on Buraku issues after the end of the Dowa programme, and in the ensuing years activists have continued to focus on community development and challenging the persistence of societal discrimination. In 2016, however, the Act on the Promotion of the Elimination of Buraku Discrimination was passed – the first piece of legislation, Tomonaga reports, to directly reference the Buraku community by name. While it represents a step forward, the act (like most anti-discrimination legislation in Japan) suffers significant shortcomings, with no criminal penalties, no clear mechanism for victims of discrimination to seek justice and no specific body responsible for implementing its conditions.

What is also needed, beyond legislation, is a wider transformation of popular attitudes and increased awareness of the exclusion that Buraku communities have experienced. The very fact that many Japanese, particularly the younger generation, are not even aware of their existence is regarded by some as a sign that anti-Buraku discrimination was a thing of the past. Yet this lack of visibility has also contributed to its persistence in other forms.

The fact that Buraku are not visibly different to other Japanese and share the same language, faith and ethnicity does not mean that the problem of discrimination has gone away. Naoko Saito, a non-tenured Associate Professor at Osaka City University, has focused much of her research on examining how major shifts within Japanese society have reshaped, but not extinguished, prejudice against Buraku. 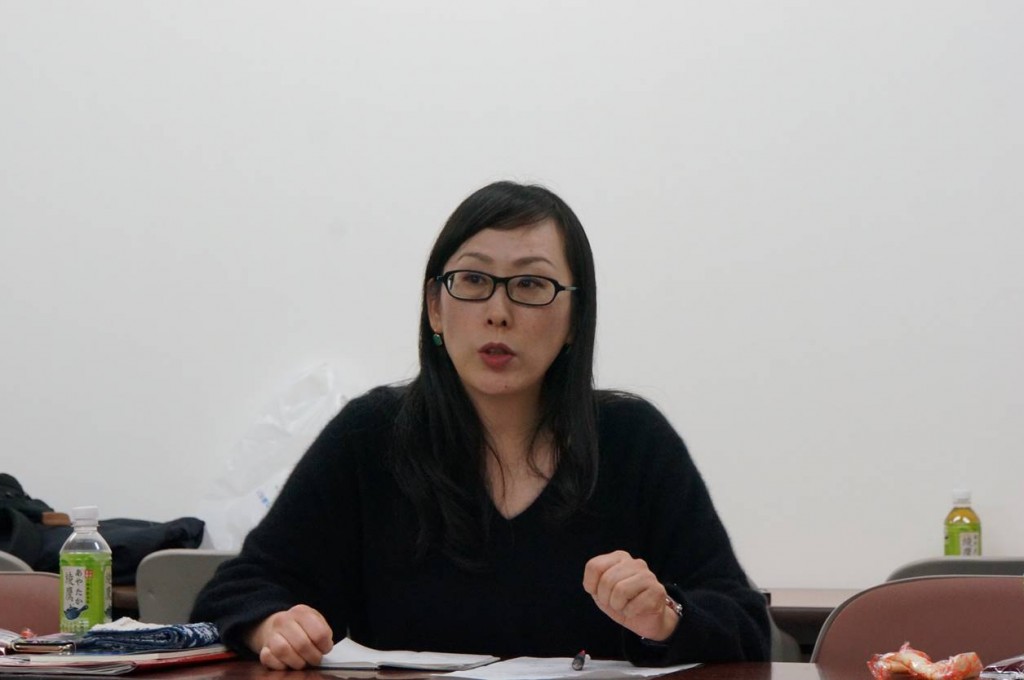 It was widely believed, she says, that discrimination against Buraku would naturally disappear of its own accord as Japan modernized. Yet social and technological change has brought new challenges. In recent years, for instance, lists recalling the old registries have been disseminated online by hate groups, making the information even easier to find. Now all that is needed to identify a Buraku neighbourhood is a good internet connection.

At the same time, for human rights researchers like Saito, the absence of a clear definition of who is Buraku and the limited data available on the community has meant that the picture of their experience today is incomplete. The government, for its part, has not conducted an official study on Dowa districts since 1993. The fact that, even after the passage of the 2016 Buraku Discrimination Act, there is no law specifically prohibiting discrimination has also meant that the government’s Human Rights Protection Bureau only investigates incidents of discrimination if it receives individual complaints. As it is rarely approached by victims, most cases go unreported, and even when formal claims are made these are not necessarily investigated.

Saito’s work focuses in particular on relationships, an area that like employment was long characterized by background checks: prospective husbands or wives might find themselves suddenly dropped if evidence emerged of Buraku ancestry. The situation has evolved significantly since the 1970s, according to Saito, due in part to a broader shift away from the practice of arranged marriages. Over time, as younger Japanese became more financially independent of their parents and social norms relaxed, the barriers between different communities reduced. By the 1990s, as multiple relationships before marriage became common, it was no longer openly acknowledged as a serious issue. 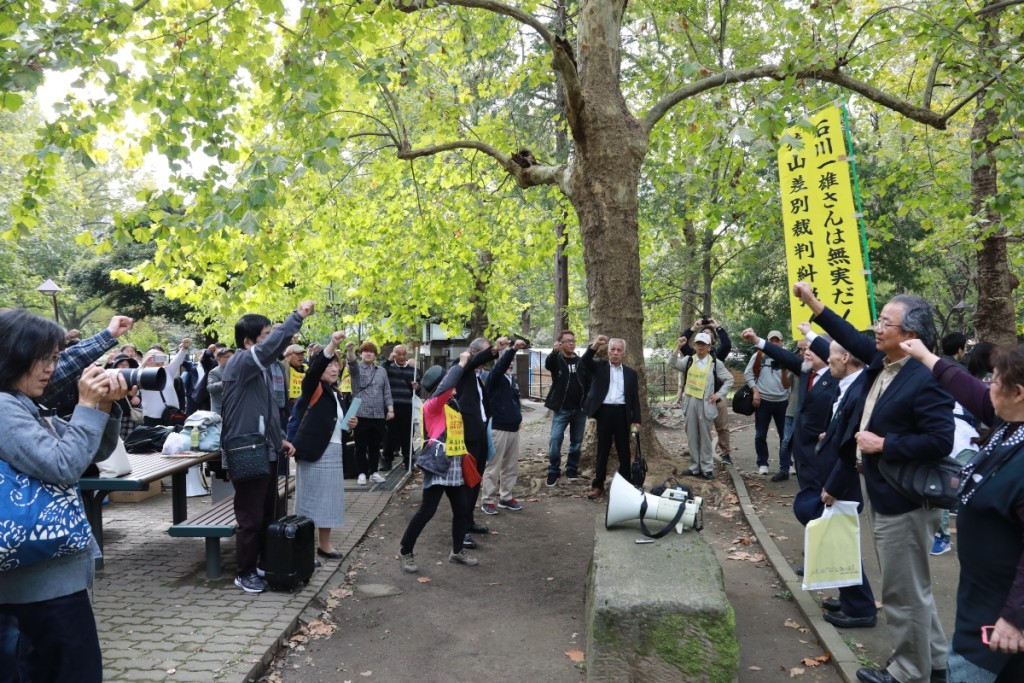 Rally in Tokyo on October 31, 2019, calling fro the retrial of the Sayama case – Kazuo Ishikawa is Innocent,

Nevertheless, there is evidence that some stigma still remains. For example, Saito cites a 2010 survey in Yasu, a city close to Osaka and Kyoto, which asked respondents what they thought if someone’s spouse was investigated for Buraku ancestry before the marriage. While only 3.2 per cent felt it was fair to do so, compared to 71.9 per cent who said they should not, 20.4 per cent felt that it was in bad taste but necessary – a significant proportion that suggests that there is still some tacit tolerance of discrimination in Japanese society.

To develop a clearer picture, Saito has been soliciting testimonies from individuals on their experiences of discrimination. Some of these also suggest that there is still some stigma towards Buraku, especially among older Japanese. Furthermore, while there does appear to be less awareness among younger Japanese of Buraku issues – indeed, in some cases, individuals only find out about their own Buraku heritage by chance – this is not the same as a positive sense of tolerance and acceptance. The danger that, if they are discouraged by their parents from continuing a relationship with someone of Buraku descent, they may not have a sufficient understanding of the issues at stake to resist. This is all the more pertinent now, with the country’s economy in stagnation, as young Japanese are again becoming more dependent on their parents for financial support. This could leave them more susceptible to parental pressure in other areas of their lives – including whom they choose to date and marry.

Saito sees education as the ultimate solution to the problem of discrimination: this means, among other things, more space in the history books and a better understanding of human rights issues for teachers, too. Saito has been encouraged by signs of increasing engagement since the Buraku Discrimination Act was passed. She herself provides anti-discrimination training at the Osaka Prefectural Education Centre and has seen the number of teachers enrolled in these sessions soar in the last three years, from just six in 2015 to 150 in 2019. This offers the hope of a more meaningful shift in Japanese society with the next generation, moving beyond a passive silence on Buraku issues to an active understanding and respect for the community.