While education is often seen as the best chance of a more inclusive future for Japan’s minorities, the issue of minority schools is currently one of the most contested in the country – with Korean schools in particular on the frontline of this debate. The most visible manifestation of this has been the harassment of Korean students by hate groups and the staging of aggressive anti-Korean demonstrations outside their schools, but these activities by a relatively small fringe are only part of a much wider picture of discrimination.

This is illustrated by the Japanese government’s new pre-school programme, rolled out in October 2019, extending free childcare for children up to the age of five at some 55,000 kindergartens and nurseries across the country: the only exceptions to this generous package were over 80 foreign kindergartens, almost half of them Korean.  It was the latest chapter in a long saga of discrimination that has politicized the subject of Korean education in Japan. Today, the situation is so sensitive that many Japanese see it as a national security concern, despite the fact that the right to education for minorities is guaranteed in international law.

Wooki Park-Kim, secretariat staff person with the Human Rights Association for Korean Residents in Japan (HURAK), describes the deep sense of despondency that has resulted from this latest act of discrimination – a situation that has left the community ‘so discouraged’. Their exclusion from the waiver not only has significant financial implications: in addition, she says, ‘it affects the dignity and human rights of the ethnic Korean minority’. Nevertheless, community members are now mobilizing with the help of HURAK to build partnerships with other foreign schools to protest their exclusion. 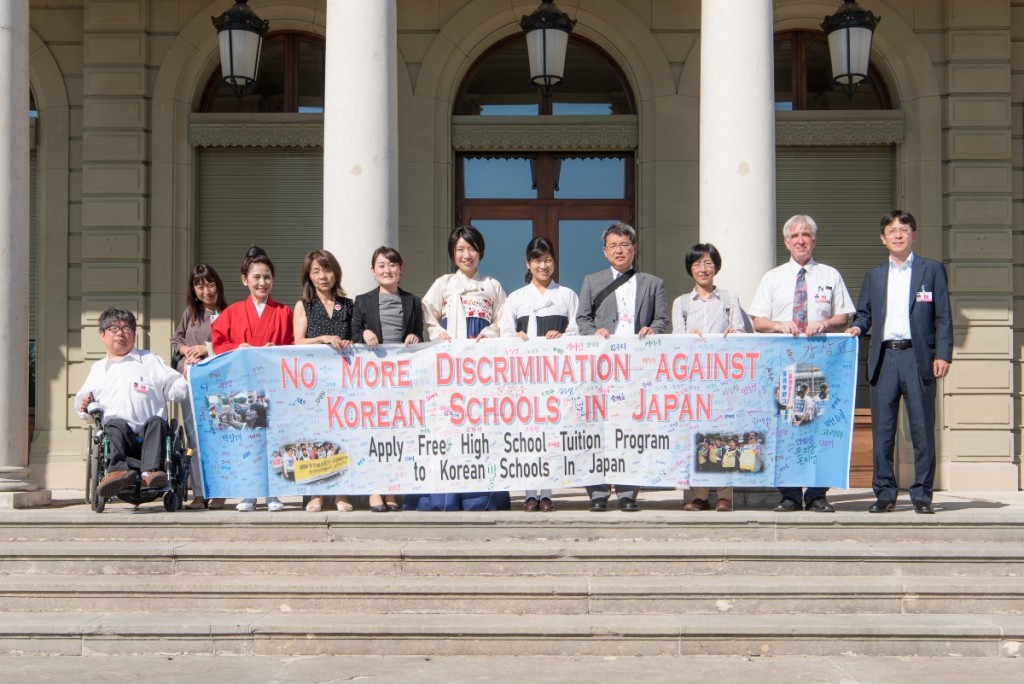 This is not the community’s first experience of official discrimination, however. In 2010, when a similar waiver of high school tuition fees was announced – students at Japanese public schools were exempted in full and those at private schools awarded a subsidy equivalent to the cost of public education – foreign schools had to go through an application process to be included in the programme. Brazilian, Chinese and other schools were eventually able to qualify, but this was not the case for their Korean counterparts. In 2013 they were formally removed by the Japanese government from its official classification, leaving them with no avenue to secure central funding. At the same time, municipal authorities followed suit with further cuts of their own: the total allocations at prefectural level to Korean schools fell from around 550 million yen in 2010 to just 106 million yen in 2017.

As a result, the cost of attending a Korean school has become prohibitive, with tuition fees rising sharply even while teaching staff have had to take salary cuts.  ‘It’s more than ten times higher than a Japanese public school and three times higher than a Japanese private school, so it’s really quite expensive,’ says Wooki. ‘That’s one of the reasons why parents are not sending their children to Korean schools, although they want to.’ She estimates that today only 10 to 20 per cent of Korean children are enrolled in Korean schools. This has had severe consequences for Korean language and culture, given their absence from the curricula of mainstream Japanese schools. While the government’s discriminatory policies have put the future of many Korean schools in jeopardy, it has shown no sign of adopting a more diverse and inclusive approach in its national curriculum.

A further barrier is the fact that, as the vilification of the Korean community by far-right groups has intensified in recent years, many young community members face increasing pressure to assimilate. Wooki attributes the rise in hate speech in part to the government’s decision to exclude Korean schools from the tuition waiver in 2010 – a policy she describes as effectively a ‘hate act’ that has helped legitimize the surge of threats and intimidation by vigilante groups against them. While hatred against the community is not new by any means and goes back decades, it has nevertheless become more visible and open. In this context, many Korean children are keen to conceal their identity and prefer to use Japanese names.

Korean school students demonstrate in front of the Ministry of Education, Tokyo.

As in other areas, the issue of Korean education is overshadowed by the turbulent relationship between Japan and both North and South Korea, particularly since the revival of nuclear testing under President Kim Jong-un and the lack of resolution over the abduction of Japanese nationals by North Korean agents. Hopes were raised by an apparent thaw in relations between the countries that Korean schools would not be excluded from the kindergarten waiver, though this proved not to be the case. Yet again, the Korean community has become collateral damage in Japan’s diplomatic disputes: as Wooki puts it, the decision to exclude them was effectively a sanction.

Many in the community feel that the government ultimately wishes to bring an end to Korean education altogether, a reflection of its broader tendency to promote a homogenous Japanese nationalism despite the longstanding presence of minorities in the country. From the late 1940s, when efforts to close Korean schools first began, there were more than 500 across the country, and since then the numbers have reduced steadily to just 66 today. Without financial support or a shift in the political rhetoric currently employed against them, the decline of Korean education in Japan is likely to continue.

HURAK and other activist groups remain active both within Japan and internationally, regularly lobbying at the UN for the Japanese government to respect the right to education for minorities enshrined in international law. At the same time, as Wooki highlights, their efforts focus on transforming attitudes within Japan towards Korean education.  ‘This is not a political issue, but a human rights issue,’ she says. ‘That is what our organization is saying to Japanese society.’