Madrid’s Critical Pride (Orgullo Crítico), is a series of events centred around a large demonstration held on 28 June, under the motto ‘Pride is transgression.’ According to its organizers, the movement was born out of a necessity to protest the commodification of the LGBT+ movement and return to the origins of Pride as a protest or revolt, rather than an event contributing to the growth of so-called ‘pink capitalism.’ 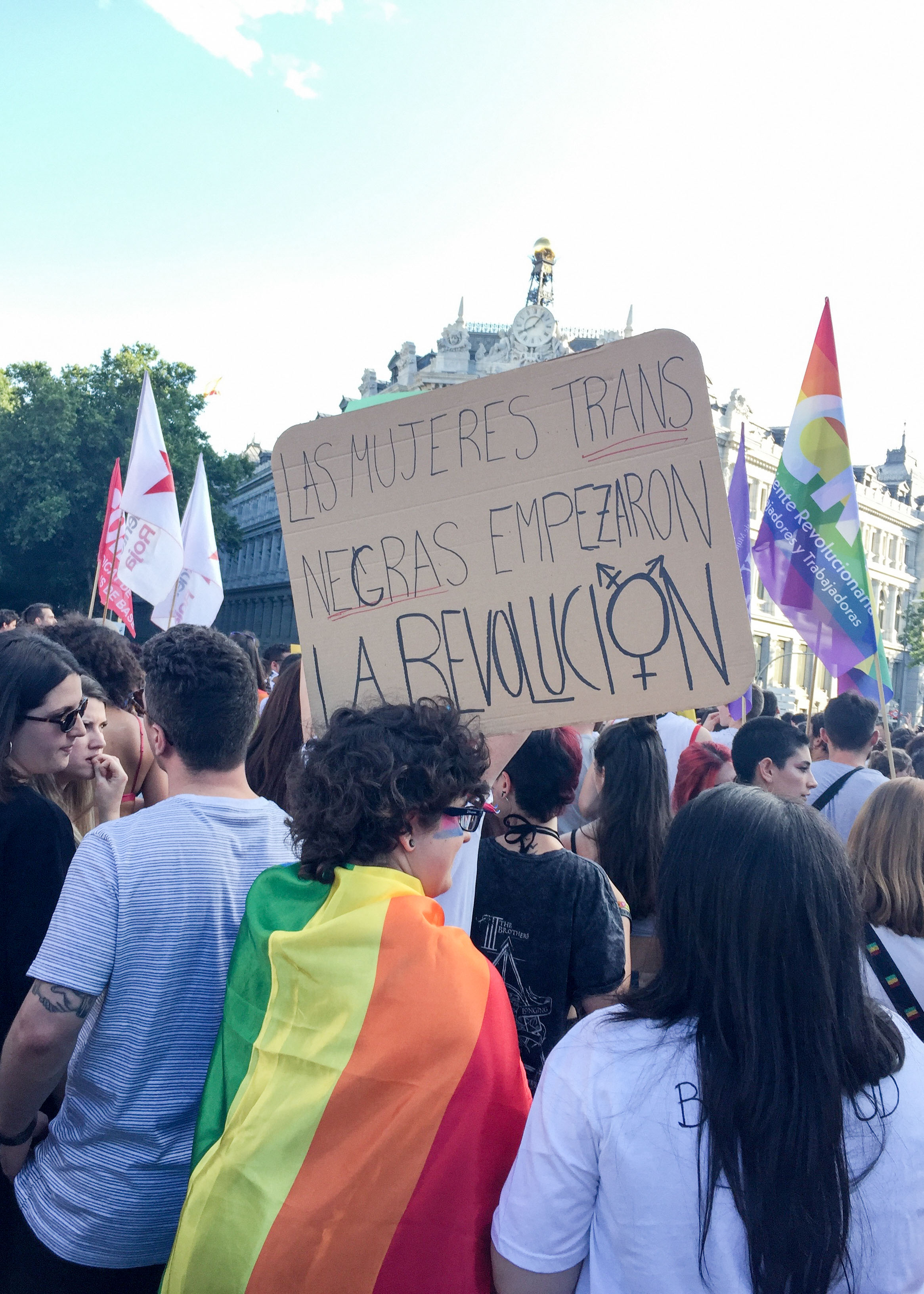 Critical Pride organisers claim that the principal protagonists of the massive mainstream Pride Parade, held a week later, are middle class Spanish, white, gay men, whose bodies also conform to a certain cis-gendered, muscular norm. The movement calls out Pride’s exclusion of marginalised groups, such as migrant, trans, sex workers, and, highlight how the realities of LGBT+ people intersect with other axes of oppression, such as class, ethnicity, poverty or physical traits and characteristics. 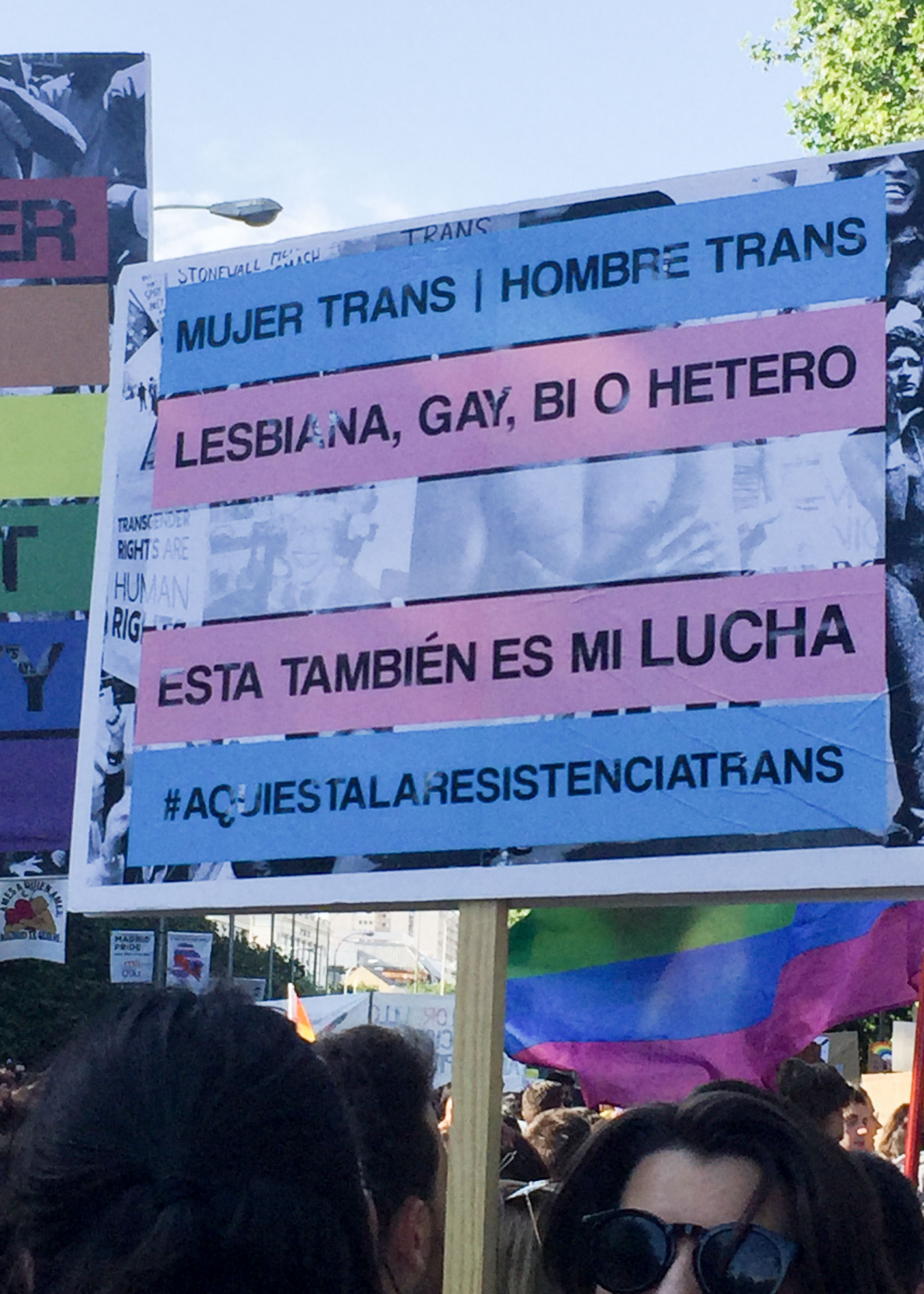 Knowing that many LGBT+ Gypsies shun the mainstream Pride celebrations, we went along in June and asked some of the members of the group Ververipen – Rroms por la diversidad, a Spanish gypsy collective, why they were taking part in Critical Pride.

‘I’m taking part in Critical Pride because it’s important that my voice, a Gypsy voice, is heard. But the Gypsy cause is not the only one I support. I support equal rights, equal opportunities, so I’m part of many movements.’

‘It’s really important to show that the Gypsy community is diverse, it’s different., it’s intersectional We have multiple identities, not only as Gypsies, but also as LGBT+ people. This rich diversity needs to be more visible.’

‘I prefer to participate in the Critical Pride march rather than the mainstream Parade, because this is more about visibility, and defending rights. It’s what most concerns me.’ 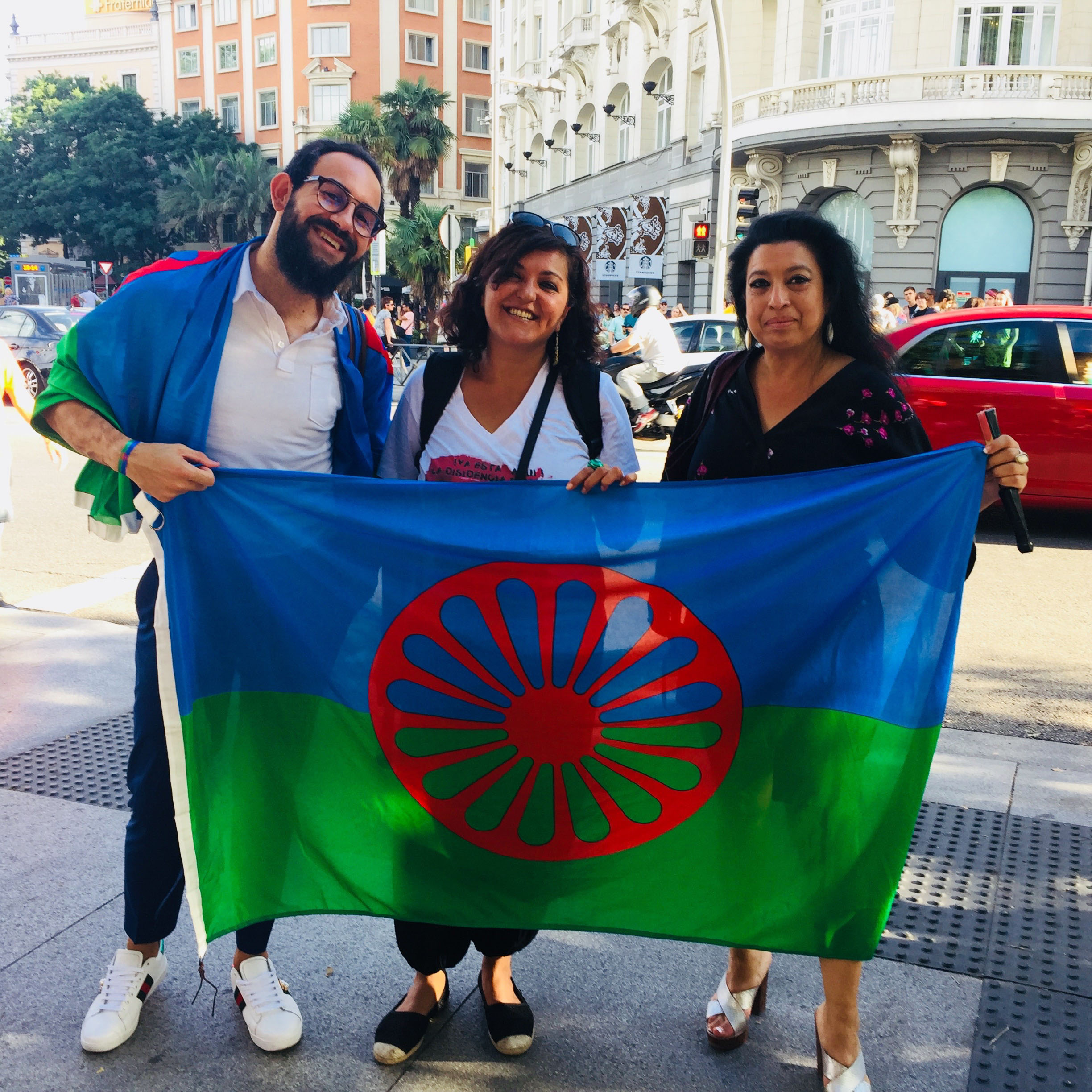 ‘I’m here because mainstream Pride has become a spectacle; it’s all just about money. Last year was awful. The small organisations were invisible. The protagonists were all the big corporations. What about the organisations and activists who are out on the streets all year round trying to improve the situation for LGBT+ people?’

‘In general if you’re a Gypsy, or a black woman, or a Latina, a trans woman, well….your difference is visible all the time, like being inside a crystal ball. It’s a really complicated situation.’

‘I’m also part of Pride in the suburbs and peripheral neighbourhoods of Madrid. So that they also have some visibility. It’s not just all about the centre of Madrid.’

‘On Critical Pride, we’re all neighbours, we’re from the street, we all diverse. As it should be right? In mainstream Pride, the diversity is on the pavements watching, we’re not on show on the floats, or in the Parade at all.’ 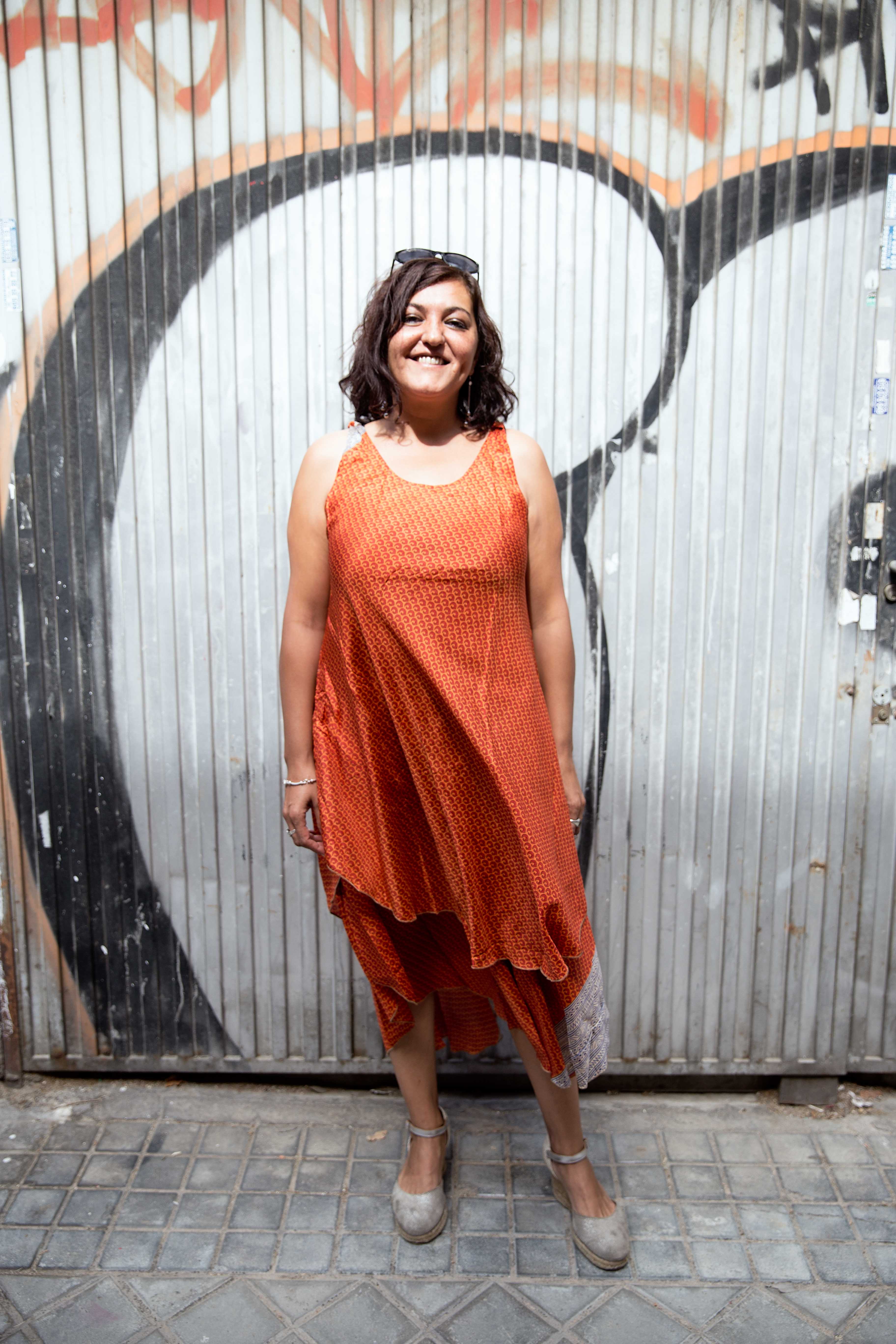 ‘We’re here because mainstream Pride, well it’s really commercial, full of stereotypes, stuck in the same old patterns. Whereas here at Critical Pride, we are claiming our rights, being visible.’

‘Gypsy sexual and gender dissidents need to be more visible. Not only to majority society, but also more visible in our own community. It makes sense for us to be taking part in Critical Pride, because we are marginalised by mainstream society, because it’s also an anti-capitalist march, there are working class people here…it’s our space, much more than the other Pride celebrations.’

The group gave us a copy of their 2018 Ververipen manifesto, which they hoped to read out at Critical Pride:

‘AMARE VERVERIPEN SI AMARE BARBALIPEN – Our diversity is our wealth.

This is our organization’s motto. We are Roma and Gadje people who fight for respect for diversity. We are against homogenization, colonization and intolerance, not only in majority society but also among our Roma people.

Roma sexual dissidents often face daily and multiple forms of discrimination and mistreatment. We are made invisible and it is difficult for us to achieve our goals of equity, respect and empowerment. We have been anonymised by LGBTphobia, silenced by the shame of our families or the invisibility of our Roma ethnicity. Sometimes we end up in an arranged marriage as an attempt to shut us up.

We are forgotten by the official and majoritarian sexual liberation movements. We face societal prejudices and stereotypes that confine us and limit us, and the rejection by important members of our own ethnic group. Your phobia of Roma and anti-gypsyism makes us invisible and can even kill us. Homophobia and false ethnic identity based on prejudices could be the end of us.

In Ververipen we claim our right to an inclusive, intersectional, decolonized, feminist, multiple and free Roma identity. One of the great values of our culture is freedom (Mestipen). We must be coherent with the values that we take pride in and make them worthy within our own communities too.

Our people are a diverse people. We are powerful as people because we live collectively. We have survived as a group because we both empathy for and defend those amongst us who are defenceless. The weakest link of our people are the ones who suffer multiple forms of discrimination, and we must protect them.

We are witnessing that in the sexual dissidence movements that have arisen in mainstream society, there is a dangerous surge towards right wing politics, homonationalism and neo-liberalism. They are prejudiced against all our tribes – the poor, ethnic minorities, stateless, political and economic refugees. If this is not stopped then all the years of speaking out for justice, the beatings, insults, murders and incarcerations, will have been in vain.

We also refuse to have our bodies and sexualities manipulated by mainstream society to justify their phobias. Their objective is to attack our group rather than to defend the rights of Roma sexual dissidents.

We do not want to stand against our allies. We seek to create a synergy based on equality, empathy and mutual respect. We want a mature form a solidarity between groups that will break with colonialism and offer a more intersectional vision of diversity.

Remember my people, NA SAN KOKORRÉ, you are not alone.