An interview with Dani – on diversity, dismantling stereotypes and the Gypsy matriarchy

My name is Daniel Janoher de Vargas. I’m 21 years old, and was born in Hortaleza, Madrid.

My family is of mixed ethnicity. My father isn’t Gypsy, my Mum yes. In the first place, I’d say I’m a human, a person, but I also see myself as a Gypsy. I’ve spent a lot of time with my grandmother, she pretty much brought me up, she shared her life with me, and has left a pretty important Gypsy legacy with me, a pride in who I am.

Women in the Gypsy community play an important and fundamental role. Majority society has always put forward an image of Gypsy society being dominated by men, by the patriarchy. It’s a huge misnomer. In my house, my Mum and my grandmother formed a matriarchy. They earned all the money, taught us right and wrong, our values. In almost all Gypsy households, women play a central role. My grandmother is the first to know if anything happens, and the first to take action. 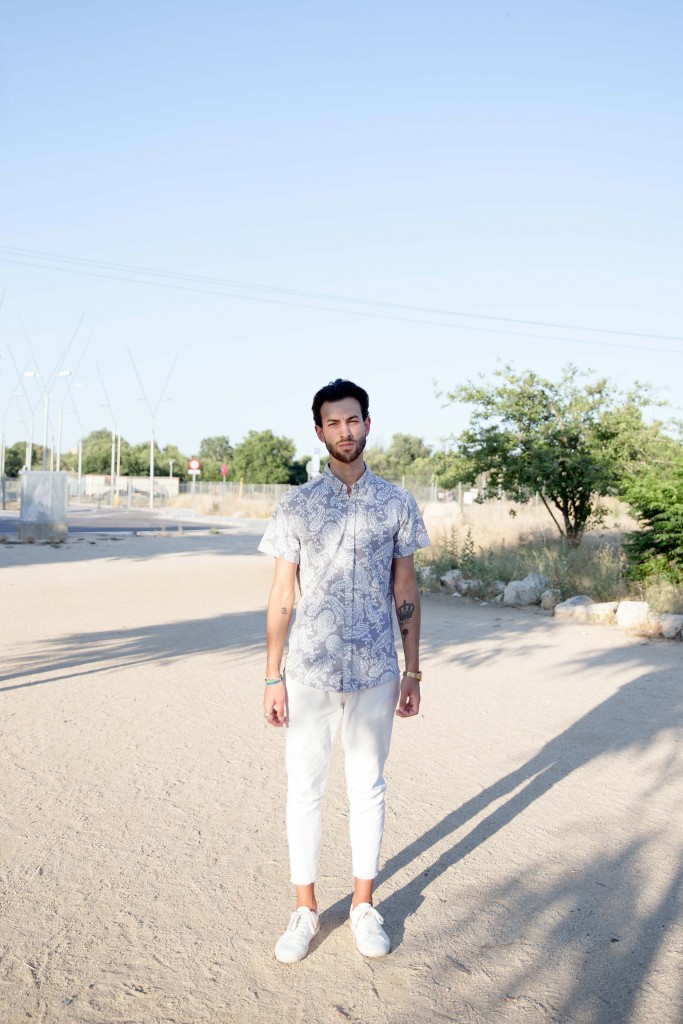 Machismo has always existed. All over the world. When my work mates say to me, ‘Gypsy men are so macho.’ I say to them, ‘And in your house the men aren’t macho? Talk to your grandfather and see what they say.’

Of course, there are macho Gypsy men, but there are macho guys everywhere. It’s as though non-Gypsy society is feminist, and all Gypsies are macho. Although my Mum and my grandmother would never call themselves such, I always say, they were born feminists.

My life is exactly like the people I work with, like every other Spanish person. It’s no different because I’m a Gypsy. I don’t think there are so many differences between Gypsies and non-Gypsies in Spain today. You can’t even tell the difference in the way we look anymore. Some of my friends, they’ve known me for months, and then for one reason or another they find out I’m Gypsy, and say things like, ‘Oh, you don’t look like a Gypsy,’ and I say, ‘What do I need to look like to seem like a Gypsy?’ I don’t understand it. What manners do I need to have, what gestures, what ways of speaking, so that I look like a Gypsy?

Generalising a little, it’s understood that Gypsy people are originally from India. Obviously therefore, the majority of us have dark skin, dark eyes. But there are also loads of us with blond hair, blue eyes….It’s all about stereotypes. Hopefully in my lifetime these stereotypes will disappear. 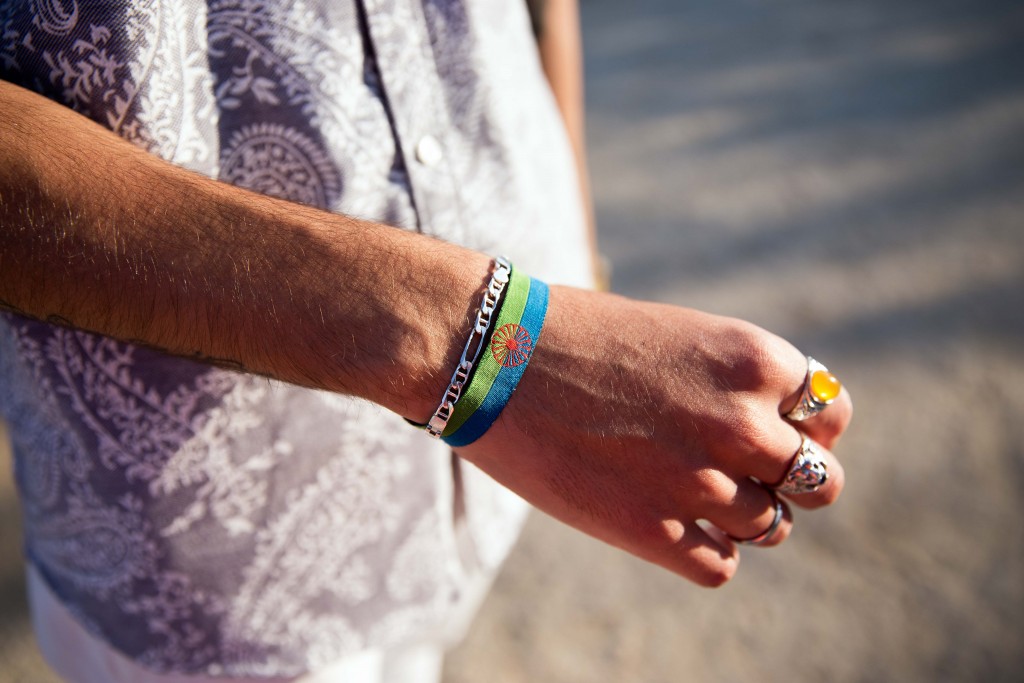 Daniel’s bracelet, reflecting the flag of the Romani people. Photo by Bex Wade.

The media has a role in reinforcing these stereotypes. There are programmes on TV which feature Gypsies who are thieves and speak really coarsely, are workshy, who just love to dance and sing. The same five Gypsy families are the ones who appear on the TV, we all know them. They’re actually well educated, but they are like clowns for the masses. It’s a circus, confirming the stereotypes. There’s a show called ‘The Gypsy Kings’ – it makes me laugh too, but instead of portraying all the beautiful things about Gypsy culture, they choose the same old storylines. It would be so good if they could show the amazing diversity within the Gypsy community.

Many people who are highly religious would say that only God can judge us. I don’t consider myself a believer in a Christian sense. I believe in God, but not in the same way as others. Human values are more important than sacred texts, a good heart is so important. 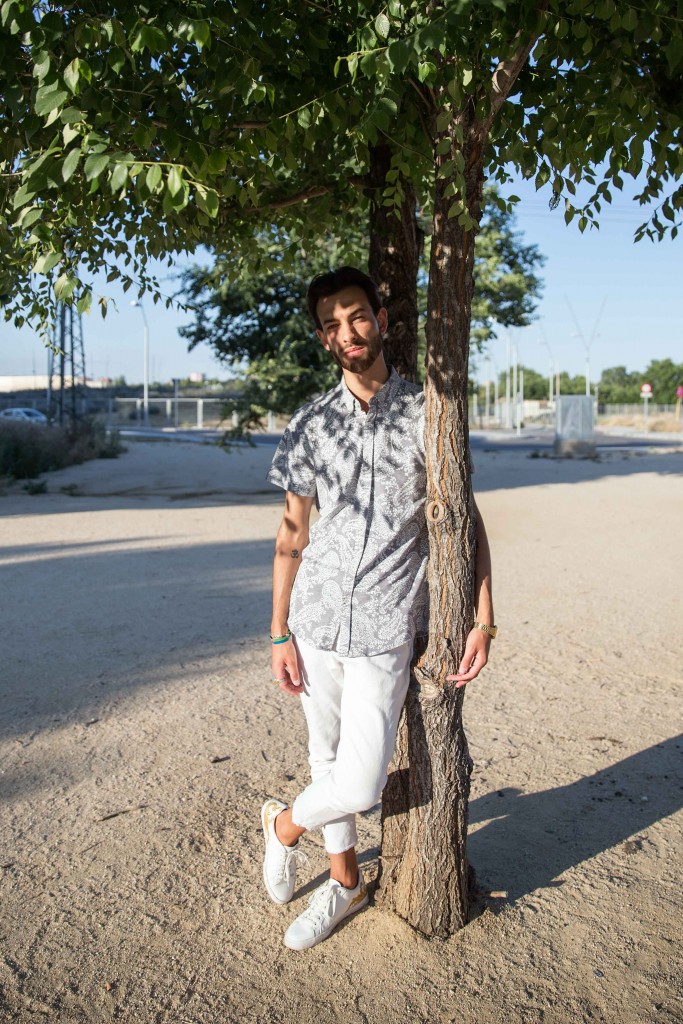 If you’re born a certain way, who has the right to come and tell you how you should live your life? There are many people who are homophobic because of their religion, especially in some evangelical sects, it’s done a lot of harm to certain people. Dissidence from the norm in our community, in all of its aspects, is so, so important in order to show the world that diversity is present in Gypsy society, as it is everywhere.

I think that my generation, and the one that follows it, are the generations of change. My hope for the future is that there will be no need for someone like me to be sitting here talking to you about all of these so-called problems. I ask people to look deep in their hearts, that they look around them and learn, to not judge people until they know them a little better. The world is a beautiful and precious place, we’re here for something, and we need to do what we can.

Being a Sexual Dissident